Quebec is a Canadian province with over 500,000 residents. It is very close to the Arctic, so it has long, cold winters which make it the perfect destination for winter sports. The city bursts into action during the warmer months. Quebec City combines the familiarity of North America with the ‘couleur locale” of Europe. Its Parisian-style flair with charming cobblestone streets shows their love for fine cuisine and haute couture.

While discovering this city’s highlights, you will be zigzagging between the Lower Town and the walled Upper Town, so take the Breakneck Stairs or jump on the funicular. The Quebecois are very proud of their French roots and will always remember their history, just like their motto says. French is Quebec’s official language, French heroes statues still dot the squares, and you will still find croissants on the menu. 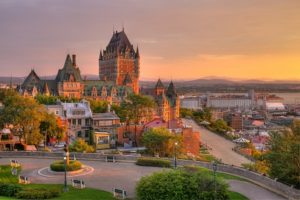 Quebec is a heritage city with its own mini version of the Notre Dame. This basilica stands at the Place Royale, the site where it all began. In 1608, Quebec was founded by Samuel de Champlain here. You will get to explore the past and you will also come face to face with some leading artists in Quebec on your way to North America’s oldest retail district. It is as if these horse-drawn carriages, food stalls, and sugar shacks have always been there. You will find another fresco just under the Breakneck Stairs. It depicts the waterfront neighborhood Cap-Blanc history.

The Old Port is a great place you can explore on a bicycle. Stop at the Musée de la civilization and take a journey through Quebec’s history right from the First Nations to its modern culture. Stroll past the cannons and fortifications on the Dufferin Terrace to continue your time travels.

Don’t miss the Chateau Frontenac which towers over the St. Lawrence River. This river plays a major part in the story of Quebec: it brought international trade, the first settlers, and the soldiers who fought for the Canadian territory. In 1759, the Plains of Abraham in Battlefields Park is where the British captured Quebec. Today, it is a peaceful city where you can admire modern art, fly a kite, and explore old defense towers.

Step through the gates of La Citadelle to watch the Changing of the Guard Ceremony. Shop in the oldest grocery store in North America to stock up on provisions or you can head out of the Old Town to experience some family attractions in Quebec. To the south is the Aquarium that introduces you to the marine mammals that live in the waters of the Arctic. The Montmorency Falls are to the north. Stand suspended in air, glide past, or witness the spectacle up close by climbing the observation platform.

At dusk, Quebec City transforms and it is a perfect time to explore Rue St. Paul’s sidewalk restaurants. Quebec is a truly unique Canadian city with the French elegance and a 400-year-old history.